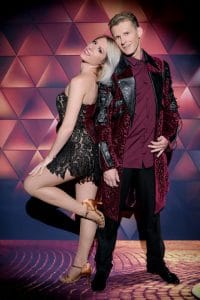 lifelong stage performers who spent the first half of their careers specializing in juggling, the Washington Trapeze as well as a hugely successful comedy dog act.

In 2010, they debuted their unique combination of the art of quick change magic with different dance styles, from Rock & Roll, Tango, Charlston and Samba, that has since dazzled audiences in 14 countries throughout Europe, the U.S. and Asia. Sebastian & Kristina were inspired and mentored by Sos & Victoria Petrosyan, (Guinness World Records Winners in High-Speed Costume Changes and the World Champions of Quick Change Illusion) who also fabricated their first set of costumes.

The act was choreographed by professional dance choreographer Nikolett Kovács in Hungary. The act debuted in 2010 at the Capital Circus with tremendous success and was the launch pad for international bookings and recognition.

Apart from their own quick change act, they are the managers and directors of Budapest Varieté Show, which was a great success in 2019 and 2020, with huge media coverage in Hungarian National Broadcasting.