As elite international quick change artists, Sebastian & Kristina know that they stand on the shoulders of giants and would not be where they are today if not for the artists who came before them. Here is a brief history on the art of Quick Change: The art of Quick Change reaches back as far as the 15th century. The art itself is in fact older however than many branches of magic.

The art of Quick-Change can be divided into three categories:

The illusion of costume change is based on the presumption of the audience that the artist gets rid of one set of clothes in order to put on another set in a second. The artist merely holds up a new costume to himself and seconds later has dressed in it. Women not only become jealous, but the men also? Seen like this, Quick Change is for many a dream come true. The art of Quick Change is several hundred years old and reaches back as far as the 15th century. The Japanese kabuki theater started with crude performances by a shrine dancer Okuni in the year 1603, although the use of Quick Change was most probably not added until after 1629 when women were banned from performing kabuki. 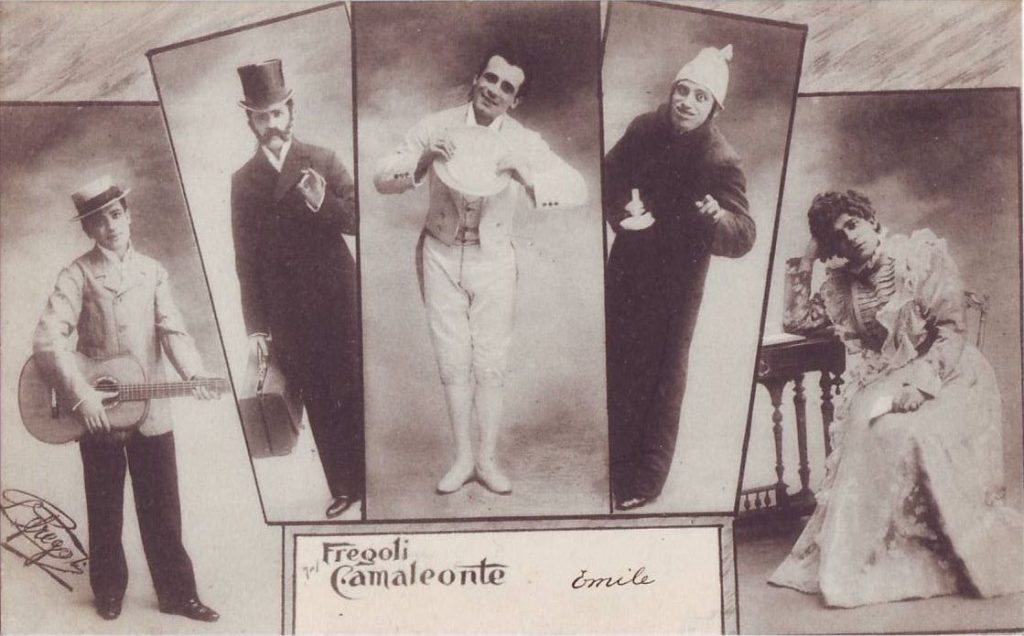 – 1897: Fregoli was the greatest quick-change artist of his day. He was famous for his extraordinary ability in impersonations and his quickness in exchanging roles- so much so that while he was performing in London in the 1890s unkind rumours spread that there was more than one Fregoli.

True? Fregoli made the costume and hairpiece changes out of view of the audience in three seconds with the help of several assistants. The most difficult aspect of his performance and style was the synchronization of gesture and voice. The rumors of Fregoli -the quickest Costumechanger- are rumors*. In fact, a similary dressed assistant had taken his place so that Fregoli could change costumes. He was very popular like Houdini – he is the forefather of Quick Change (but not the first). *Quote: “Meta-Morphing” by Vivian Sobchack

Mlle. Fregolia appears to be the first popular woman to perform Quick Change with prepared costumes ( Fatima Miris was considered the most important at the time, but Mlle Fregolia, of French origin far outshone her performances). In a short two part act totaling fifteen minutes, Mlle. Fregolia played the part of fifteen characters (men and women) with an incredible forty costume changes. The exact number of characters varies from different reports 12 characters and forty costumes, to 20 characters with 100 costumes! This is most probably due to the fact that at every curtain call she also would change costume everything right up to the stockings!

Mlle was also considered a great actress during these playlettes “The Lightning Waiter“ and “Husband’s Return“. Skeptics were unable to believe that only one woman was playing all the parts, and so a reward of $1,000 dollars was offered to anyone who could prove otherwise.

In modern times, Arturo Brachetti from Italy revived the Fregoli style of Quick Change with his one-man-show “The Man With a Thousand Faces” which features more than 80 transformations. He has won numerous awards including the Moliere Award in Paris (equivalent to the Broadway Tony Award) and the Olivier Award in Canada.

Many Russian artists brought Quick Change back to the circus in the middle of last century. It was very popular but the quality of costumes are not very high. Originally this kinds of acts was started by the Russian couple Sudarchikovi ant at that time a really sensation. The couple changes at first Russian artists a high fashion collection. Pictured in the right side: Liubov and Anatoli Sudarchikovi (special thank for photo to Bolshoi Circus) Their first TV appearance was 1988. In 1995 they won the silver clown in Monaco.

The original Sudarchikovi Act started in 1969. He was dressed in black tailcoat, she is in a long gown. She goes in a tube and changes in one second to a cha-cha-cha-dress. Then she performs a few glove color changes. She steps into a screenfrom the right side to the left and now has on a latin dress. After this follows a costume change in a fringed hulahoop. In a sub trunk illusion he changes his dress to a white tailcoat. She changes her dress twice in a cape of silk to a black and thento a red dress. Finally she changes her red dress in silver confetti to a white bridal gown. This is the original Sudarchikovi Snowstorm effect.

Another Dynasty is Monastyrsky. Tatjana is third generation to perform her art of quick-change. Her transformation with an umbrella was created by her grandfather Vladimir Monastyrsky in 1963. The very first time it was shown in the circus, with her partner Angelina Monastyrskaya.

Today the transformation has become an art of entertainment in its own right. Several artistes have created their own performances to show this fascinating art of Quick Change. Many of them are unique and have completely different performance styles and effects (including the covers used during the changes).

In the nineties last century some magicians spiced up their acts with a costume change. In a boom of “price winning magic acts” in some magic competitions the single Quick Change worldwide has been changed to a magic trick. The Fédération Internationale des Sociétés Magiques -FISM™- the world’s leading magic societies consists of over 60 clubs, both national and international, as well as national Federations which represent nearly 50 000 Magicians from 32 countries. At the FISM World Championships more than 100 of the best magicians have been competing every third year since 1948. At the last FISM 2006 two dozen magicians performed costume changes as a magic trick.